Currently in “The Maze Runner” there are two characters that really stuck out to me. The first is the main character Thomas. He is suddenly trapped in a very weird deep underground maze. He is introduced to the story right when the first sentence is written, the reader experiences all of the weird new things that is happening to Thomas when he is experiencing them himself. Thomas is a very smart character and also one I enjoy reading about. Ever since he is introduced to the big group of people that they expect him to call his “new family”, also known as the “Gladers”, he completely loses his mind and questions everything that the Gladers expect him to accept right away. Him questioning every little detail attempted to be explained to him makes the leader of the Gladers, Alby, makes everyone extremely frustrated with him for slowing down the process of the explanation, but to me it’s hilarious. Thomas is extremely terrified and scared, but fights off all of these feelings with question that he knows isn’t what the Gladers want, and there is a feeling in the back of his mind that they will try to hurt him, but he knows he has nothing to lose at this point of his life and he does it anyways. The second character that stuck out to be was a little boy named Chuck. He is the youngest Glader by far, a little teenage boy. What stood out to me however is the fact that he admits he has not been in the system long just like Thomas. But Chuck already seems to know so many details about things Thomas is completely lost about. This leads me to believe that people really learn things quick in the Glade, especially if a young kid like Chuck knows so much. For a young boy, Chuck is extremely smart and always is on high alert. He looks towards a certain area knowing there is a commotion before a loud scream startles everyone else. I don’t think of him as a little jumpy kid as much as I think of him as a smart young boy. So far in the story, these two characters stood out to me the most, now I am interested to see what it is they will do next. 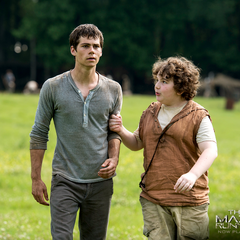