The poetry unit had been challenging for trying to find interpretation based on many different factors but I had gotten past that. Then the transcendentalism chapter happened and I suffered through. Then for some reason a person thought hey lets make a giant confusing poem about transcendentalist ideas so that future children can be tortured while trying to figure out why a talking hawk is yelling at him while he is dying. The section my group was assigned was the last section of the poem that Walt Whitman was writing on his death bed. Almost every line in this section did not have a literal meaning. Without knowing what transcendentalism was it would be almost impossible to understand what he was trying to say. Knowing that he was dying while writing this section helped understand what he was trying to relay onto the readers of his poem. His life work was this poem and the ideals can be important to philosophy but I don’t think that it is important for high school students to understand what he is saying by trying to figure it out themselves. My thoughts on the last section are mixed because I still don’t fully understand it or if he is trying to connect the idea of grass to an afterlife society. His devotion to transcendentalism effects his work by becoming part of his controlling image. A lot of his ideals between nature and its connection to everyone comes from the transcendentalist idea of the over soul which means everything is connected to one divine being so everything is naturally good. This ideal is very apparent in his work. “The spotted hawk swoops by and accuses me, he complains of my gab and my loitering.” seem to be the most important lines of my section. They show that Walt Whitman is mocking his own poem with a joke about how he wrote a fifty two section long poem about taking action to become a better person while he is sitting around writing a really long poem and not taking action himself. This work had been difficult to understand due to its complexity and connections but with a lot of time and effort it can be understood. 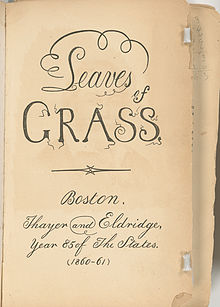