The music that makes us feel more than we knew we could.

The Wall! It’s Gonna Be Huuge.

So I will be debating the wall at our southern border. My assigned position is to debate for building the wall, closing our southern border. My personal position on the wall stands against the idea. I don’t think it will make this country any greater and I don’t think it will keep more immigrants out. There will always be more and more ways to get into the country with our without a wall. The most I know as of right now about the wall is that it is incredibly expensive. Four miles of wall is twenty-two million dollars. Well the southern border is roughly 1800 to 2000 miles long. Do the math. With my basic google search I get news websites and websites of different organizations of facts, statistics, and opinions on the border wall with different sides saying why it is a bad idea and why it is a good idea. So in a logical approach I will address how walls separate countries and people and fix immigration problems. Walls keep unwanted people from getting into places and elected officials don’t want a certain group of unwanted people to get into the country and a wall would help this goal be accomplished. An ethical approach can be  that drugs are often smuggled into the country along with unskilled workers that won’t be able to add anything to our economy. As far as the drugs go they will flow through out our streets poisoning the minds of the children of America. The emotions that can be played in both is well in the logical approach there really aren’t any emotions. With the ethical approach is the fear of the influence that illegal immigrants will bring on the youth America and more of the Central American culture will take over our own and lead us to an increase in illegal drug use, crime, and over all deaths. But of course that is the approach from the stand point of someone that would support the wall and not my actual opinion on the wall and why it should or shouldn’t be built. Over all I’m not excited to debate. I have never been very good at it and have sort of raised myself to always keep my political opinions to myself so yeah this is going to be awful but good for me I guess. 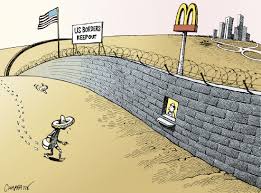 These widgets are displayed because you haven't added any widgets of your own yet. You can do so at Appearance > Widgets in the WordPress settings.

Theme by Anders Noren — Up ↑