I actually liked reading “The Celebrated Jumping Frog of Calaveras County” because it was easy to understand and follow and what the story was about was interesting and  intriguing.  I honestly enjoyed the satire Mark Twain used because he made fun of the reader, and it was interesting to read because I had absolutely no idea until after the fact.  I never thought to think if Simon Wheeler was actually smart or not, and it turns out that he was actually very educated and had intellect.  Someone dumb and uneducated would never be able to make up stories like Wheeler did.  The one thing I think I know about Huck Finn is that it takes place somewhere where lots of farming takes place.  I don’t really know anything about it besides seeing some of the projects laying around the room from last year.  I do’t know much about the book, but I am actually interested to read it because Twain’s short story about the frog was good, so I’m sure this book will be intriguing too.  I found the short film “Imom” very weird and somewhat dark.  The fact that at the very end they zoomed in on the chicken sitting in the baby’s bed really made me feel uncomfortable because everyone in the room knew where the baby had actually ended up.  It really hit my core and gave me a rotten taste in my mouth to see mother’s buying a replacement because they don’t want to be in their child’s life.  The satire going on in this film is making fun of the moms which was unfortunately very accurate to modern life mothers.  My favorite was the party parents that decided to have a kid and also go out every night of the week.  It just made me sick because my mom is on her own to raise three kids, and she always finds a way to be at everything everyday for us.  She is always helping us through hard times and trying to give us everything we need, and to see mothers not care at all just really made me feel badly for society as a whole. 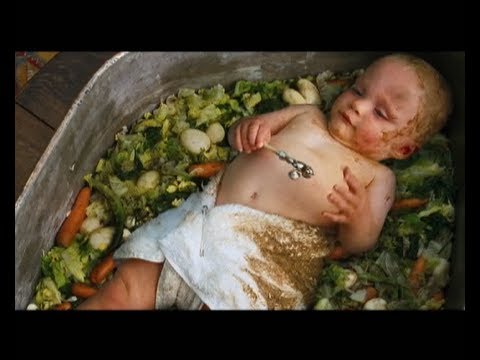