I chose the sentence music came from the abandoned house. I had two thoughts that I got from the sentence, either the music could be haunted music coming from a haunted house, or a story about teenage kids playing music from the house. My story is about two kids. One is quiet and want’s to doe something more than what his parents want him to do after high school. The other is a trouble maker who has no plans with his life and lives off his parents money. They have a dream of starting a band inspired by their classic music inspirations. However its 2018 and no one thinks their band will be good because every one likes pop music and rap. So from all the pressure and negativity the protagonist Freddie they bad one of the two friends has the great idea to leave and go out west with no money, no plan, and just trying to get famous. Which the percentage of that happening is very small and charlie the main character knows that but’s hes so bored with everything and fed up with his parents he leaves. Which ends up sparking a series of adventures and them getting into some trouble. they really wanna find some people that appreciate bands like zeppelin and black sabbath to help them boost their careers. But along the way they meet a lot more interesting people who each have a story to tell that helps charlie learn different lessons. ill tell each of their stories by adding flashback about each person they meet. I thought it would be a cool way to make the story interesting and actually be realistic instead of something like they find a time machine and get to travel back in time but get stuck and have to figure out how to get back. Which I might have to end up doing if my story ends up not being interesting which it’s probably gonna be pretty terrible, we’ll see. The things we’ve been doing have just helped me develop the characters and how they interact with each other through the story. I also realized how much the conflict is important and shapes the whole story.

When i first got the book tell me three things i thought it was gonna be a relatable book cause it’s about a girl who is a junior and talks to someone online which seems pretty similar to today. Then I started reading more of it and it wasn’t quite what i expected. It’s more about this girl being herself and trusting one person to guide her through high school. Which is pretty common in other stories and movies. I still think it’s different and good though, because it’s really important to have that one friend that helps you get through high school and that’s kind of what she’s trying to let happen but she’s having trust issues at first which actually can be relatable. Even in our school gossip can get around and you need that one person that you rely on and now that you can trust them and get help from at bad times. I can already predict that something is going to happen between her and the anonymous person that is trying to help her and be her friend that will make him show his true self and she is going to have to learn to forgive him, the anonymous person might even be someone she has a crush on in real life. However this book would definitely take a turn being that it’s not the predictable book i thought it is going to be i feel that it has a good amount of mystery. Although i haven’t read to much of it yet so far though i really like how the book is set up in the way the main character is telling it. On some of the pages it’s her sending back and forth emails with the anonymous person and the interesting conversations they have with a little bit of humor here and there. It makes the book a lot more interesting and adds foreshadowing on different events that may or may not happen at her new high school. The book has an overall good mix of comedy and the tragedies of life and high school.

The devil and tom walk was a very unusual and hard to understand at sometimes kind of book. but when you break it down and read through over and over it’s very interesting and makes sense. I’ve never read anything like it before but there’s lots of stories about learning lessons and not getting over taken by money. Also how it got tom and his wife killed by the devil. There’s a lot of interesting twists and turns in the story not just about tom and the devil but also the colony. The people aren’t even phased by the scary setting of the swamp and the devil killing tom and his wife. Usually in normal stories the towns people are all scared or chasing the bad guy with a pitch fork. In the beginning however it was interesting when it talked about Kidd being a pirate and having treasure which I’ve heard of before.Which kinda tells you It’s not a good society and maybe they are all crazy. The only point you really get out of the story is mostly to not let money over take you and if the author is trying to be religious not let the devil tempt you. If I could change or modify the story I would definitely add more about the wife and continue her interaction with the devil a little bit to make it more interesting. Add some detail and action to spice it up because even tho you know she died it drops little hints like there were foot prints and clumps of the devils hair was pulled out. I would also juts modernize some of the terms and words used so that way people could understand it better cause I know personally I had to read it a couple times to get the full theme of the story. I would also maybe add a little more about the people in the colony and make them react more the events in the story and more about the trees. Other than that it was a very interesting story that I’ve never heard of before and it makes you think and read it a little different than normally to process the different terms used and interactions between the devil and tom. 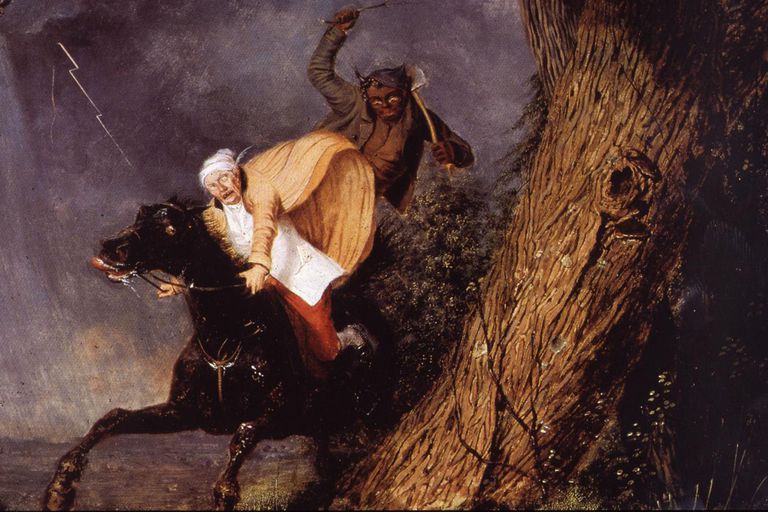