Huckleberry Finn….a well known classic,which either means it will be extremely interesting or extremely painful to read. So far Huck Finn has just been mediocre. Its not fantastic but it could be a lot worse. I was expecting it to be a little bit more interesting but hopefully it gets better as the chapters go on. However, I do admit it is a lot better than the beginning chapters so that gives me hope its going to get better. I am not a fan of the diction because I don’t like the southern twang Mark Twain uses. I feel like you never really get a good feel for the characters when they are introduced. I dont fully understand the character Tom Sawyer because I feel as though we should have read Toms Sawyer’s book first since Huckleberry Finn was intended to be a sequel. The satire that’s included is actually kind of confusing because I cant quite pick out what hes trying to make fun of or criticize. Once I fully understand it, maybe the book will become funnier but as of now im just confused at what hes trying to get at. I do like that although Huck Finn may seem like a children’s story at first, it is actually quite dark when you think about it. I think by including Hucks dad it gives an insight on some issues that are going on still today. Huck struggles having to deal with his fathers alcoholism and it has even come to the point where he was chased around the house with his father threatening to kill him. There are children who grow up with abusive and alcoholic fathers and mothers and I think this book helps point out that it does happen and isnt something that only happens in the movies.He also points out about slavery when the genie in the bottle is mentioned and i think that comparison is actually quite clever. Slaves like genies must listen to what the master (or person who finds the lamp) wishes. The story addresses issues a lot of issues which I think is really good. Overall, the story is decent but I was expecting more. 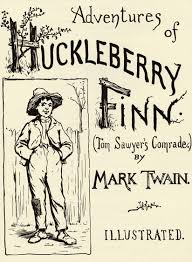