At first i was sceptical of the film but the further we got into the film the more I wanted to find out what Rosebud ment and why it may have been so important to Mr.Kane. That being said the movie all in all was an awesome  movie from the cinematography to the acting and costume design. The way the movie was filmed made it seem to be ahead of its time given all of the moving shots and cinematic shots throughout the movie. Given the movie budget would exceed the 11 million in modern cash value the film was done properly and no part of this movie was half assed. The entire movie down to the wine glasses on the tables to the cinematic shots of the Xanadu was filmed with precision. For example when it shows Susan and Mr. Kane having breakfast over the years they start sitting farther and farther away from each other depicting their growing hate for each other. Charles Foster Kane is a very disturbed man by the end of his life which to me sounds like it stemmed from a young age. Perhaps it could be from him growing up with a silver spoon in his mouth every day not having to worry about anything and having everything done for you. To me this is not a proper way to be brought up, I think you should have to earn something if you want it that bad and not just make a stop at the bank and then shell out the cash for it. Susan’s flashback was by far the most revealing to me because it showed not only the partially decent side of Mr. Kane but it mostly shows the nasty side of Mr.Kane and how horrible he really can be. For starters Lowman and Mr.Kane are two very sick men who ended their lives with nothing. Both of these characters think they know what’s good for everyone else and  except for them because they are too worried about other people to stop and ask if they are happy or if the people they are “helping” are even happy themselves.

Lowman did to Biffs football carrier what Mr.Kane did to Susan’s singing career. Lowman caught cheating was the same as the bad review in Mr.Kane’s news paper. Could be completely wrong but that’s my interpretation of those two characters. The number one poem that conveyed the imagist style of writing was Madonna of the Evening Flowers. To me when i read this poem it put a vivid picture of a woman with a medium sized basket for picking flowers filled to the brim with roses. The way she describes the woman with such detail not only about her appearance but her character makes the woman she is describing seem real. Only one part of imagist poetry is the image the poet puts in your head using very descriptive text in the work. The other part of imagist poetry is the message conveyed by the image the poet is describing. The “hidden” part of this poem is actually fairly easy to pick out because you can deduce that she is a lesbian and the woman she is talking about is her lover. Knowing this looking at the rest of the poem the poet is explaining no matter who loves you you feel loved and that is what is important. Most of the poems were good at displaying a form of imagist poetry and there wasn’t one that stood out to me as a non imagist style poem. Some were better than others but they all conveyed an imagist style of poetry. My favorite poem is The Red WheelBarrow simply because of its simplicity. The way the poem is formed is so simple and easy to read while the meaning of the poem is so complex. That’s why I like this poem in particular out of all of the poems given to us. 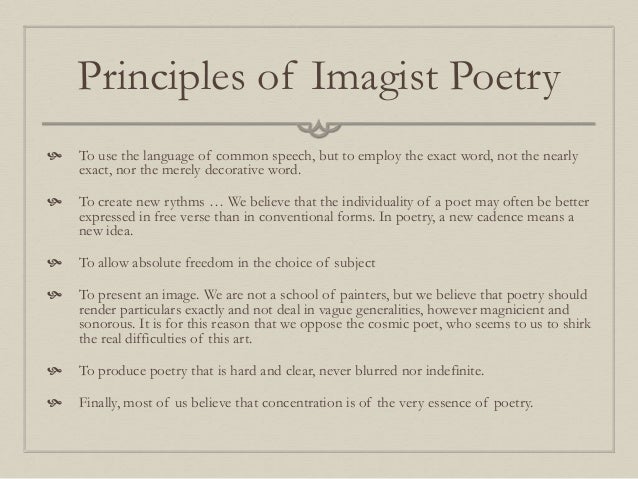 The main point of imagist poetry is to paint a picture of a person, place or thing that has a deeper meaning than what you are just reading in the lines. For imagist poetry you need to read between the line to find the true meaning of the poem, or what the author is trying to say with the image that the author paints for you. Usually in imagist poetry the author is being satirical of an aspect of society or society as a whole. For example Madonna of the Evening Flowers talks of a woman who is feeling lonely but when she sees her from what we can assume is her lesbian partner and she is very happy to see her.I can’t really compare it to any other kinds of poetry because it is so diverse from anything that we’ve read all year. That being said i could compare it to some of poe’s poems because the imagist author paints such a vivid picture just like poe does in his super creepy poems. In a Station of a Metro is an example of imagist poetry because even though it is a very short poem of only two lines it displays a picture in your mind of a vivid metro station. This being an imagist poem there is a meaning behind the picture that Pound is painting for us. He is describing how delicate and beautiful life is because he is comparing it to the pedal of a flower while the surrounding metro is a wet black bough. I’m not a huge fan of poetry but this is the kind of poetry that is interesting to me because the thought that goes into these poems is  incredible. To be able to write a poem about a metro and somehow has a secondary meaning to it having to do with societal opinion is astonishing in my eyes. Madonna of the Evening Flowers was the most shocking to decipher because for a woman to be writing about loving another woman is unheard of in that time period. The courage and intelligence it must have taken to write a poem of that caliber is amazing, and the message conveyed very progressive for a woman of her time.